Nothing Says, “I Love You,” Like Bourbon-ed Cherry Tomato BBQ Sauce

Salutations blogosphere, did you miss me? It’s been a long, eventful summer. Lots of familial excitement (the good, the bad, and the bizarre), creative redirection in the form of some short stories that have somehow become rampant novellas, and cardio retraining after a series of injuries. Don’t let anyone tell you it takes a special kind of person to sprain the same ankle 4 times in a 2 month period cuz I’m hobbling about here as proof that all you need is a little grit and determination so you too can spend your weeks with an elevated eggplant masquerading as an ankle. Sigh. On the bright side, it’s been two weeks now since I’ve been able to hop back onto my beloved bicycle and tool around town. So while I’ve been absent, I’ve still been playing with the fruits & vegetables of our labors and hopefully will get around to posting the daunting backlog of recipes.

Even though it’s September and the neighborhood kidlets have gone back to school, the sun is still shining brightly here in Portlandia with highs in the 80s which means that my jungle of Sungold cherry tomatoes is still going strong. I’ve been harvesting a few pounds of sugary sweet, juicy tomatoes twice a week and let’s just say we’ve been living the high life. A savory tomato jam that makes a good substitute for mustard was good for at least a couple quarts of delicious hybrid tomato munchkins as well as a spicy Sungold arrabbiata served with pasta made using ChgoJohn’s easy and delicious strozzapreti tutorial, and a savory cherry tomato cobbler with fresh corn ,cheddar, and Parmesan drop biscuits just to name a few. Let’s just say that if I suddenly become vitamin A, C, or K deficient I’m demanding a recount cuz just 1 cup of raw tomatoes contains 25% of the RDA of A, 32% of C and 15% of K!

So, despite going on 20+ mile bike rides with the hubster on a wobbly ankle and firing up the oven for lemon-blueberry coffee cake with streusel topping and a lemon glaze when it’s 80+ degrees outside, he measures love in tablespoons of sweetly, tangy, savory, spicy, tomatoey sauce that coats pork, like the starlet du jour’s jeggings cuz 2013 is the new 2010 😉 In the photo above the protein was oven roasted pulled pork and ポテトサラダ (potetosarada) Japanese potato salad but it also accessorizes well with other proteins like beef, chicken, or shrimp. And before you take a look at the ingredients list and accuse me of being made of gold, which I am at least Sungolds, besides using up all those tasty sweet little tomatoes that are threatening to take over the side of our house, by using sweeet cherry tomatoes I’ve been able to make BBQ sauce without ketchup which apparently is the backbone of grill couture. I’ve also opted for maple syrup and molasses as the sweetener cuz they give you a smoky undertone without having resort to liquid smoke cuz I prefer to avoid ingesting ingredients that are more damaging to my cells than cigarette smoke [shudder]. And the soupçon of bourbon, most of which is burned off with all the simmering and reducing, leaves you with a slightly woody, smokiness too [hic!]. So nothing says, “I love you,” like half a pint of homemade BBQ sauce except for maybe 5 more jars. And yes, I’ve been cheating on the hubby and handing these babies out to our friends cuz love is in the air and the on the grill 😉

Trust me, it all turns out in the end.
1) I really like onion, shouldn’t I just dice it and keep it in the sauce? I guess if you like chunky texture in your BBQ? Actually, most of the oniony flavor leaches out when you boil it in the sauce which is why when making soup stock you can just dump the entire onion into the broth, giving you onion flavor and making it easy to take the solid onion out so you have a smooth, clear broth or smooth, opaque sauce in this case. This way you can just pluck the onion out with a slotted spoon instead of having to strain the entire molten sauce. And speaking of straining, you’ll note the tiny cherry tomato seeds present on the basting brush above but even though I’m pretty texture aware, I couldn’t even feel them when I was downing mass quantities of spicy, tangy sauce. Oh, the rigors of taste-testing ….
2) I’m not made of cherry tomatoes, lady, can’t I just used regular ones? Probably? You’ll need to use extra sweetener in addition to the maple syrup and molasses like brown sugar as well as some more cider vinegar to give you that tangy kick these Lilliputian babies are known for.
3) Really? I have to pressure can these? They’ve been simmering for over an hour, we’re talking undead sauce at this point. The USDA recommends pressure canning for foods that are low in acidity because a higher pH (less acidity, higher pH) allows bacteria (we’re mainly concerned with Clostridium botulinum when preserving) to grow in canned goods and some tomato varieties have a pH above 4.6 which is the safety cut off for acidity. Since cider vinegar has been added to this you’d think that would be enough to keep the pH low but undiluted apple cider vinegar has a pH between 4.26 and 5.00 and 2/3 of a cup isn’t really that much acid to drop the pH of 3-4 pints of BBQ sauce. On the bright side, your friends will still be able to breathe without a ventilator and you’ll have BBQ sauce that can be enjoyed until cherry tomato season rolls around next year 😀
4) If I had to pick a small appliance that I get the most bang for my rupiah it’d be my stand mixer but second place would go to my immersion blender. If you make a lot of sauces or thick velvety soups, it’ll not only get a lot of mileage but also make your cooking life easier and safer too. Instead of having to pour boiling hot liquids, usually while juggling a heavy unwieldy pot, into my food processor or blender to purée them I can just stick my immersion blender into the pot and pulse away. There is a small learning curve to remembering to let go of the pulse button when you’re lifting the immersion blender up so that you don’t splatter yourself with scalding purée but otherwise it’s easy sailing. It’s also much easier to clean than the trusty food processor or blender which I like to think are being better utilized making stress relieving margaritas.

In a large ~3.5-4 quart pot bring all the ingredients to a boil then simmer and stir frequently making sure to scrape the bottom of the pot till onion is soft and translucent ~30 minutes. I like to add the smallest amount of the ingredients that have a range (the maple syrup and Sriracha sauce) so that I can add more if I need to once I’ve tasted the sauce when it’s been adequately cooked down. Remove the onion with a slotted spoon and discard.

Using an immersion blender, food processor, or blender, pulse the sauce till the tomato skins are puréed. They’ll look like tiny slivers but won’t affect the texture of the sauce. Reduce the sauce at a simmer until it thickens to the consistency of a thin ketchup ~45 minutes more. 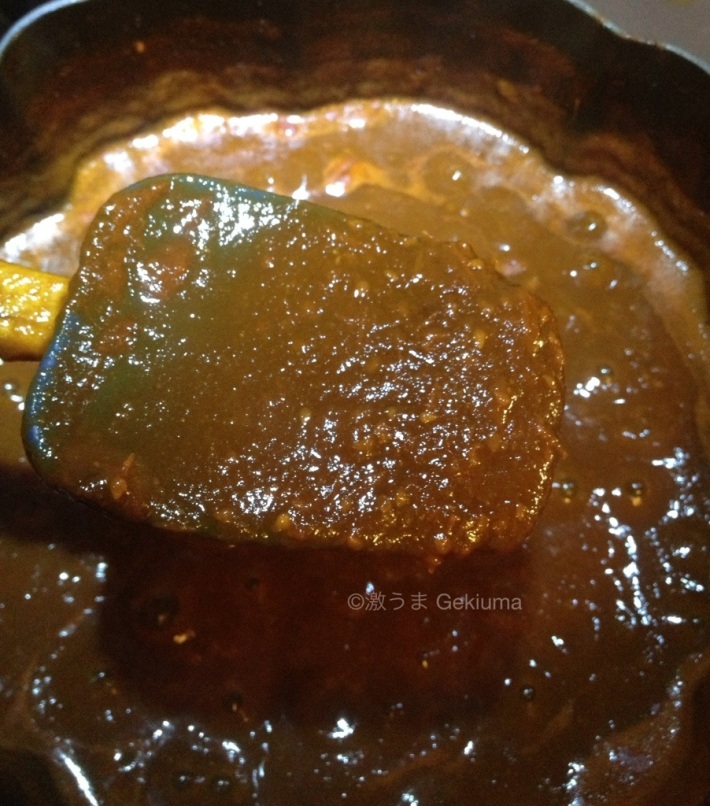 Add the remaining maple syrup and Sriracha if you want your sauce sweeter or spicier and reduce again till you’ve got the consistency of a thin ketchup. Let cool for ~15 minutes till safe to handle then pour into sterilized 8 oz (1/2 pint) canning jars filling to just below the fill line. I find it’s easiest to use a ladle to scoop out the sauce and pour it into the jars. Screw jars closed but not tightly and process in a pressure canner at 11 pounds for 15 minutes. Once the pressure canner has equalized to ambient pressure, open canner and screw jar lids tight using an oven mitt or kitchen towel to protect your hands from the heat. Makes ~six 1/2-pint jars. Keeps in a dark, cool place (like your unspooky basement or a cabinet that’s not right next to your oven) for ~1 year. Refrigerate once opened in case any sauce is leftover once the BBQ sauce monster has been on a rampage.

What's on your mind? Cancel reply