It’s funny how you can be puttering along happily and then suddenly realize that you’re missing out on something that, now that it’s on your radar, sounds pretty amazing. I’d never really given much thought to squid ink preparations except for the passing interest with the striking obsidian color in glossy photos and a vague academic curiosity, would it taste salty, gritty, bitter? Very few foods are pitch black and most things I can think of, like super overripe bananas or charcoal, you wouldn’t want to ingest. And then the hubster went to an academic conference in Barcelona and started texting me pics of his meals. Actually, first he had me do research on where to go for traditional Catalan faves like escudella, panellets, and of course, paella cuz the roaming data charges in the EU are usurious. What I didn’t expect was a picture of lustrous Stygian black rice dotted with seafood instead of the golden Valencian paella that usually comes to mind when paella is mentioned. Strangely, while the cooking method is the same (paella pan, rice, sofrito–sort of a tomato-based mirepoix, broth… ), this is considered “black rice” in Spain, not squid ink paella but well potato, patata, ya know? 😉 Thus began my fascination with squid ink, which will occasionally grace a menu in the form of pasta but paella or risotto are uncommon which is a shame cuz that’s where it really shines. Unlike pasta, you can really taste the briny, subtle sweetness in those dishes cuz the squid ink is coating the rice and not bound up in the flour. And yes, I said sweetness, similar to the sweetness of fresh scallops or crab. Yum. And yes, it took me almost 2 years to make this cuz not only was “squid ink” hard to find but there’s a lot of chaff out there to sift through.

This recipe is a modification from Saveur and is quite simple and painless as paellas go. I’ve adjusted the ratios to make 4-6 servings (a 13.5-inch or 34 cm paella pan) instead of 6-8 and switched out the squid (it’s near impossible to get non-frozen here in Portlandia) for scallops and mussels which really compliment the savory sweetness of the squid ink. I’ve also mixed the squid ink throughout the broth cuz it’s just easier that way. Speaking of which, while it’s universally referred to as squid ink, it’s also universally sold as cuttlefish ink so don’t worry if your specialty store plunks down a jar or packet labeled cuttlefish ink cuz that’s what everyone uses unless you butcher your own fresh squid which will contain their own paquetes naturales. In retrospect, my paella wasn’t as glossy black as I would have liked (more like sooty) and I definitely think that while it tastes delicious (the guests and hubby were happily overstuffed and supposedly it tastes better than the scrumptious ebony starch he had in Barcelona but since he’s married to me, that’s probably part of the marriage vows, no?), increasing the squid ink to a full tablespoon would be better all around. 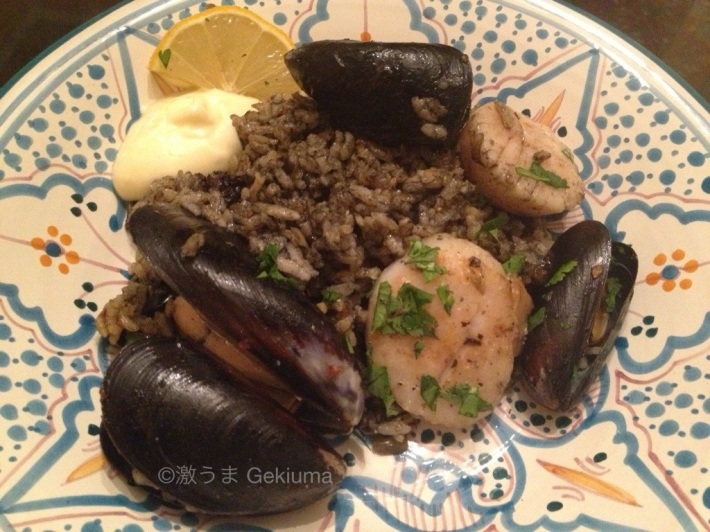 Painless paella? Speaking in oxymoron are we?
1) How do you get that delicious socarrat the gastrosnobs are all moaning about? Unlike other rice preparations, with paella you actually want to create a crunchy crust of caramelized rice at the bottom of the pan. Why? Cuz not only does it provide added texture but you add a toasted flavor to the rice that’s already been soaking up juices from all the other scrumptious ingredients. First, pick up a carbon steel paella pan if you can, they’re cheap ($15-20) heat evenly and quickly, and provide the perfect amount of surface area for cooking the rice with broth cuz you need all that surface area to cook the rice and create a crust (paella pans get wider, not deeper the more servings you want to make). If you can’t find one, use a large sauté pan or deep skillet but not cast iron cuz it retains heat and will get too hot. No stirring of the rice once all the stock is added. FYI, since carbon steel is reactive, after washing with hot water +/- scrubbing with a silicone scraper and no soap, dry it with a dishcloth and give it a quick oiling with vegetable oil just like trusty cast-iron to keep it from rusting and over time it will develop a non-stick surface. Your little paella pan will keep you happy and popular for years 🙂
2) What’s the easiest and fastest way to make tomato purée? Grate a tomato with a box grater, the flesh will be grated into a pulp while the skin stays intact and spreads open like a flower. Just make sure you do it inside a wide-mouthed bowl cuz it gets very liquidy and it’s better to pour all that liquid into your pan instead of having it dribble all over your counters, right?
3) Don’t skip the aïoli cuz the garlicky, lemony silkiness really enhances the flavors of the paella. I’ve had it both ways and it really does add an extra oomph. If you’re worried about cholesterol, I make my own and only use 1 egg for over a cup of aïoli and you only need 1 tablespoon of aïoli per serving. Ojai also makes a delicious Lemonaise if you’re pressed for time.

Bring stock to a boil in a ~2 quart pot then cover and turn off heat. Stir in paprika and squid ink.

While stock is heating, heat 1 tbsp olive oil in paella pan over high heat till aromatic but not smoking. Season scallops with salt and freshly ground pepper and sear ~30-45 seconds per side. Remove from pan and set aside. Lower heat to medium and add remaining olive oil. Sauté onion till soft and translucent ~4-5 minutes then stir in garlic, salt, and tomatoes. Reduce volume to ~2/3 then stir in rice so that it is evenly coated with the sofrito.

Add hot stock from stock pot, ~1 cup at a time, to paella pan adding more as it’s absorbed by the rice. Shift the paella pan around on your burner every few minutes to ensure even cooking. Once all the stock from the pot has been added, embed mussels into rice, hinge side down (the rice will still be liquidy at this point, some of these are still open cuz they just came out of the water and they’re so fresh!).

Once the mussels have opened return scallops and any accumulated juices to pan. Once all of the liquid has absorbed, increase heat to med-hi for 1-2 minutes to develop your yummy socarrat. If your rice is still firm/crunchy, cover with foil and allow residual heat to finish cooking it. Turn off heat and let sit for 10-15 minutes (this will be served in the paella pan at the table and you don’t want to get burned while serving yourself, don’t worry it’ll be plenty hot) then garnish with parsley and serve in paella pan with lemon and a dollop of aïoli. Makes 4-6 servings.

What's on your mind? Cancel reply